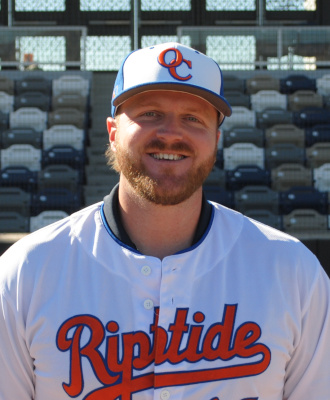 Spencer is no stranger to coaching in the CCL.

During the 2022 season, Connor coached the infielders & 3rd Base Coach for the Riptide, helping lead the Riptide to a third place finish in the 2022 CCL post season tournament.  Prior to the 2022 season, Spencer ran the offense for the Arroyo Seco Saints in 2021. The Saints made a solid run to the CCL semi-final game but lost to the eventual champions, Healdsburg Prune Packers.

Born and raised in Orange County, Spencer played his high school baseball locally at Tesoro High School. He led the State of California in batting average in 2010 and holds almost every major offensive record at Tesoro. After a successful career in high school, Spencer played in college for legendary coach Mike Gillespie at UC Irvine.

Spencer won the Big West Conference batting title in 2013 and helped the Anteaters reach the 2014 College World Series in Omaha. Spencer earned Most Valuable Player of the Corvallis Regional honors that same year. Spencer’s name is riddled throughout UCI’s record books despite only playing three seasons there. The New York Yankees selected Spencer in the eighth round of the 2014 MLB draft after his third season at UCI.

In Spencer’s first professional season, he won a minor league batting title. Spencer’s .364 average in the New York Penn League made him the first Yankees farm hand in the history of the organization to win one. Over four seasons in the Yankees system, Spencer finished his career batting above .300 with two All-Star appearances.

Spencer chose to walk away from professional baseball after four years. After pro baseball, Spencer worked as a national scouting coordinator for Perfect Game. In his role with PG, Spencer scouted some of the nation’s best high school and college talent. Despite much success in scouting, Spencer knew coaching was his true passion and calling. He broke back onto the field as a coach at Tesoro High School in the spring of 2021 and the Arroyo Seco Saints during the 2021 summer.

With the Riptide in 2022, Spencer oversaw the infielders and the offense. Two infielders from the 2022 Riptide squad turned pro (Chase Valentine drafted by the San Diego Padres and Marc “Bubba” Filia signed with the Cleveland Guardians.) Spencer directed a potent offense in 2022 with seven Riptide players batting over .300, belting 10 home runs and stealing 65 bases. 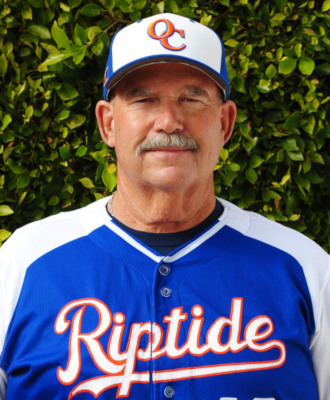 George Horton’s duties with the OC Riptide will be broad in scope assisting in various aspects including player development, mentoring the coaching staff and enhancing organizational growth.

George Horton is best known for known for guiding national power Cal State Fullerton to the 2004 National Championship and for resurrecting a dormant University of Oregon baseball program.

In his combined 28 seasons as a collegiate head baseball coach, George Horton amassed a career record 1,091-546-2 (.666) record. He is a member of a number of Halls of Fame including the American Baseball Coaches Association (ABCA), Cal State Fullerton Athletic Department twice (Assistant Coach on the 1995 National Championship team and as Head Coach), California Community Colleges Baseball Coaches Association and Downey High School.

Horton’s roots run deep within Southern California and Orange County. A standout baseball player at Downey High School, Horton played baseball at Cerritos College from 1972-1973 and won a state championship there in 1973. As a player and later as a young assistant coach at Cerritos, Horton received coaching and mentoring from the legendary Wally Kincaid. (Kincaid led the Cerritos baseball team to a 678–163 win–loss record, 15 conference championships, and six state titles. He retired as the winningest coach in junior college history.)

After playing at Cerritos, Horton transferred to Cal State Fullerton and continued to play baseball under another legendary coach, Augie Garrido. His second season at Fullerton, the Titans advanced to play in the 1975 College World Series, the Titans’ first year as a Division 1 program. In 1997, Augie Garrio took the head coaching job at the University of Texas and Horton was named head coach of the storied Cal State Fullerton Baseball program. Horton served as Titan Baseball’s skipper for 11 seasons (1997–2007). Under Horton’s direction, the Titans reached the post-season in all of Horton’s 11 seasons, the Super Regionals in seven seasons, the College World Series six times and won the 2004 National Championship. During his 11 seasons as head coach of the Titans, Horton compiled a record of 490–212–1. (.698)

In September 2007, the University of Oregon resurrected its baseball program starting in the 2009 season after being a club sport since 1982. Horton was tabbed to head the first team in 2009 in Eugene, Oregon. In Horton’s second season at the helm at Oregon, he led the Ducks to the NCAA Division I baseball Tournament for the first time since 1964. In his 11 years at Oregon, Horton compiled a record of 375–281–1, went to the post-season five times and the Super Regionals (2012) once.

Horton earned the USA Baseball Rod Dedeaux Coach of the Year Award after serving as the head coach for the 2016 Collegiate National Team and was a member of the U.S. coaching staff in 2012. In 2012, Team USA defeated Team Cuba in Cuba for the first time in history.

Horton’s ability to facilitate and develop players is unparalleled. Horton was the college head coach for 48 former players that have reached the Major Leagues. In addition to player development, as a head coach, Horton has seen over 60 colleagues and former players advance to become head baseball coaches and teachers at various levels.

George Horton is a graduate of Cal State Fullerton with a Bachelors in Kinesiology and holds a Masters in Education from Cal Lutheran. He and his wife, Francie, met in 1975 and were married in 1977 and currently reside in Yorba Linda, Calif. George and Francie have four daughters, nine grandchildren and a new Vizsla dog named Lucy. 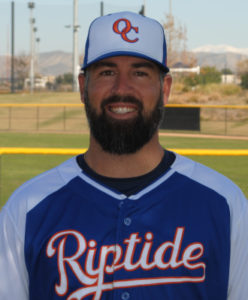 Bryan Evans will handle the pitching coaching duties for the summer 2023 season.

Another Orange County native, Evans played at Tesoro High School where he still holds the record for overall wins. As a senior in high school, Evans was named Pacific Coast League Player of the Year as a senior, finishing with an 8-1 mark and 1.52 ERA. He attended UC Davis and in the 2006 season, worked his way into the Friday night starter role as a freshman.

The Florida Marlins selected Evans in the 14th round (418th overall) Major League Baseball’s first-year player draft in 2008. In a 12 year professional baseball career from 2008 to 2019, Evans played within three MLB organizations. Drafted by the Marlins, Evans also played within the Colorado Rockies and Seattle Mariners. While with the Marlins, he advanced to Triple-A (New Orleans Zephyrs) and again to Triple-A with the Mariners (Tacoma Rainiers).

Evans is single and currently lives in Mission Viejo, Calif. He earned his degree in business management from the University of Phoenix. 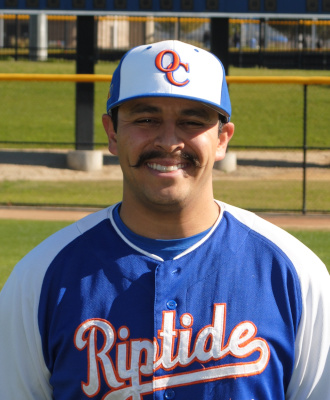 Andrew Ramos will handle the catching coaching duties for the summer 2023 season. Ramos returns to the Riptide after handling the catching and bullpen duties in 2022.

Coach Ramos is no stranger to the California Collegiate League. Prior to joining the Riptide coaching staff, Ramos began his career in the CCL as part of the San Luis Obispo Blues coaching staff from 2019-2020.

Prior to his time with the SLO Blues, Ramos coached the University of the Cumberlands (KY), a nationally ranked powerhouse in NAIA. During his time at UC, Ramos helped guide the Patriots to a 2019 Mid-South Conference Regular Season Championship. Cumberlands also received a host site for the second consecutive year for the NAIA’s 2019 World Series Opening Round. While with the Patriots, Ramos coached the catchers and hitters and assisted the Patriots to lead the NAIA in home runs in 2019.

Ramos cut his teeth coaching for the OC Riptide’s affiliate team, the OC Surf, in 2018. As part of the OC Surf staff, he took the team up and down the California coast in an old fashioned barnstorming campaign. The Surf traveled to Fairbanks, Alaska and competed against the Alaska Goldpanners in the 114th Annual Mid-Night Sun Game.

An Orange County native from Santa Ana, Calif., Ramos has spent most of his playing career in Southern California where he has competed with and against some of the nation’s top players. He received his Bachelor of Science degree in Exercise Sport Science and a minor in Public Health from Cumberlands. Prior to UC, Andrew spend two years at two top tier Junior Colleges in Southern California, Santa Ana College (’16) under Head Coach Tom Niles, and Cypress College (’15) under Hall of Fame Coach, Scott Pickler.

Andrew Ramos is currently a Graduate Assistant Coach for Holy Names University where he is working towards his Masters Degree in Applied Sport and Performance Psychology. 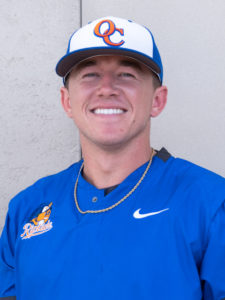 Matt Smith will return to the OC Riptide coaching staff in 2023 in an expanded role. In 2022, Smith served as the Volunteer Assistant Coach and Team Manager. in 2023, Smith will handle the outfield coaching duties.

From Monterey, Calif., Smith has played college baseball at the Division 1 level, Junior College level and now he currently plays at the NAIA level.

Matt Smith is a center fielder who graduated high school in 2016 with a scholarship to play baseball at UC Davis. His redshirt freshman year (2018) he made the most of his opportunities and hit .375 to finish the year.

After the season in 2018 he decided that UC Davis was not a good academic fit for him, and it was time for a change. Smith transferred to Folsom Lake College, considered one of the best  junior college teams in Northern California.

Matt will graduate with his degree in Business Administration in the Spring of 2023 and hopes to give back to the game of baseball by coaching, and putting an emphasis on the mental side of baseball to any player who he encounters. 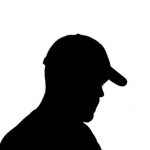