The Orange County Riptide is a collegiate baseball organization that provides student-athletes from all over the country the ability to continue their baseball career in the summer during the
college baseball off season.

One of the main goals the Orange County Riptide is to develop collegiate baseball players and return them to their respective colleges better players than when they arrived. Their experience as players on the OC Riptide helps not only their college baseball team but provides them with exposure to professional baseball scouts. These scouts can best evaluate the players’ talent and skill and how it translates to the game of professional baseball because players are playing with wood bats and flat seamed baseballs, the same equipment they will use in the professional ranks.

The Riptide could not provide this outlet for college baseball players without partnering with local Host Families. Host Families are families living in Orange County that are willing to provide a living space, food and care for the student-athletes that come to Southern California from across the country. Host Families are vital to this organization due to the growing number of out of state players who prefer to play in the California Collegiate League because of the high level of competition it offers.

“Outside of funding, host families are the most important aspect for the organization,” Geoghegan said. “In order to have a good team, you need to have good players from other states. It’s difficult to get local guys to stay home because some local universities tend to send their better players away from home. To be competitive in this league, you have to grab guys from the SEC, ACC and Big 12 and make other good connections. Host Families are everything to us. We wouldn’t be where we are without them.”

In 2019, the OC Riptide fielded a team with just fifteen out of state players placed with host families. This upcoming summer of 2021, the Riptide will have over 25 players lined-up in need of host families. “In my eyes, providing an experience and a second family for a player is just as important as developing baseball skills,” Geoghegan added. “These relationships have been built for years and a lot of these host families grow a connection to the player that they host, making them want to see their host player grow.”

The host family experience does not just end when the player returns to his university. Many families stay in touch with their players long after their summer in Orange County is over and establish lifelong relationships with not only the players but their families as well.

Many out-of-state players point to the warm yet non-humid weather combined with entertainment venues outside of baseball within Orange County creates an ideal environment to play baseball during the summer. But not all OC Riptide players are from out of state. Local Southern California college baseball players can also continue to compete at the high level that the CCL offers without leaving home. a number of formerly uncommitted Junior College players received offers to attend four-year universities prior to the completion of the OC Riptide season in years past. In order for the Riptide to continue to build their reputation within the Orange County baseball community, they look to provide more opportunities to uncommitted players in order to showcase their talent and advance to the next level.

In addition to host families, there are other ways Orange County residents can get involved with the OC Riptide. The Riptide offers many internship positions within the organization. Some internship positions include stadium organist, team photographer, game day operations manager, sports information director, producer, director, videographer, social media and publicity team, Baseball analytics and official scoring team, and scoreboard operator. These internships help students build not only their resume, but expand their knowledge and experience working within the sports entertainment professions. 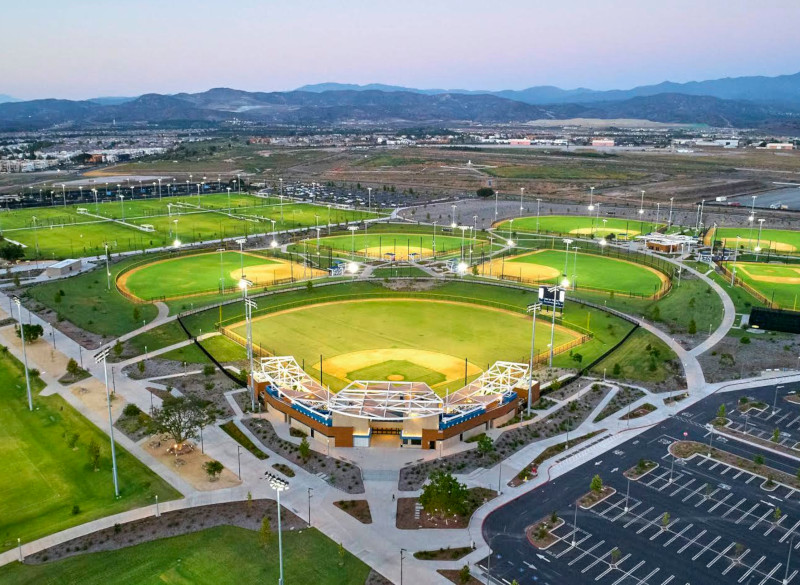 The OC Riptide bounced around Orange County in the early years and did not settle on a firm home stadium until 2019. It was that year that the Riptide opened up the season playing at the Orange County Great Park in Irvine. The Riptide will return to the Great Park again in 2021. Prior to landing at the Great Park, the Riptide previously played their home games at Vanguard University in Costa Mesa (2016), Concordia University in Irvine (2017) and Fullerton College (2018). The Riptide’s home field seats roughly 1,500 spectators and features underground locker rooms, indoor luxury boxes, broadcast booths and large video screens.

After experiencing a wealth of early success, the Riptide have had their fair share of talented prospects. Over the past handful of years, the Riptide have built a reputation that allows them to have some of the best athletes in the country. A portion of these players that come to California to play for the Riptide includes players from universities such as Vanderbilt, Texas Tech, University of Nebraska, Arkansas, Tennessee and Georgia.

Notable players who not only had a major impact on the 2017 championship-winning team, but also received 2017 California Collegiate League All-Tournament Team honors include: Arkansas outfielder Dominic Fletcher, Oregon State shortstop Beau Philip, St. Edwards pitcher Juan Cortina, Hawaii third baseman Logan Pouelsen, Texas pitcher Parker Joe Robinson and Texas outfielder Tate Shaw. This 2017 “dream team” won the organization’s first championship since joining the league the year prior and tallied a record of 33 wins and 11 loses. Of the few losses in 2017, the Riptide never lost by more than three runs in any of those games.

The Riptide will participate in a 40 game regular season in 2021, 30 games vs. the six teams within the CCL Southern Division. Despite the OC Riptide’s relatively young age in the CCL, General Manager Moe Geoghegan has never had a team finished below a .500 winning percentage since 2017. Since that time, over 20 OC Riptide players have been selected in the Major League Baseball draft or signed professional baseball contracts.

The OC Riptide opens the 2021 season on June 8th vs. the San Diego Waves at the OC Great Park. Admission and parking is free.

The OC Riptide encourages all Orange County baseball fans to join them this season as they make a run for their second CCL championship.