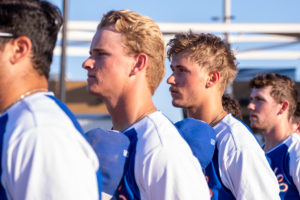 Blake Penso (UClb) got hit behind home plate by a foul ball in the chest causing him to be replaced by Gavin Mez (UNLV) also in the bottom of the fourth.

The Riptide had bases loaded at the top of the seventh. Joey Nicolai (UCR) got picked off at first as well as Gavin Haimovitz (SBCC) who hit line drive to the second baseman who caught the ball making it a double play losing all players on base and ending the inning 9-6 Foresters.  Hitting coach John Thornhill got ejected defending the Riptide players from the Umpire call at first base during, this will be back to back ejections from the Riptide coaching staff with bullpen coach Andrew Ramos ejected on Sunday nights game.

Trevor Meisner (Utah Tech) took over for Carson Case (Nevada) during the top of the eighth only pitching to four batters not allowing any runs in. Score kept at 9-6 Foresters.

Nathan Smith (Tennessee), designated hitter, had a full count at the bottom of the eighth when the umpire called an out-of-zone pitch a strike leaving Smith frustrated exchanging words with the umpire leading him to get ejected from Monday nights game.

The Riptide will be at home again on Friday night @ 6:35 pm against the Arroyo Secco Saints at OC Great Park.