The California Collegiate League (CCL) allows college baseball players to develop their abilities, make friendships, and showcase their talents in front of MLB scouts and viewers from across the country. The league of 11 teams has become one of the top collegiate summer leagues in the nation since its founding in 1993.

One unique feature of the CCL is the host families. The host families are huge for the league and give out-of-state players a place to live. Geoghegan emphasized the struggle to find hosts every year, but how thankful he is for the families who, he said, “treat our players like gold.”

Additionally, the players are not associated with any college during the summer, and it allows for long-lasting friendships to form, and for college teammates to go head-to-head on different teams. 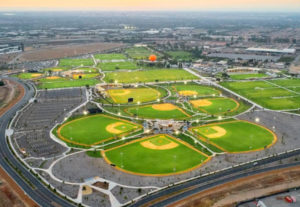 The OC Riptide play their home games at Great Park, located in Irvine. Last year, the team averaged about 150 people per night, according to Geoghegan. Tickets are free, there are promotional events, and several MLB scouts are present with radar guns and notepads.

“There have been several guys – not just our team but other teams – that have signed free-agent deals right out of here,” Geoghegan said.