Offering free parking and admission, a tight-knit community feeling, affordable food and beverages along with elite college baseball competition, The OC Riptide created the perfect atmosphere for a little league mom. She shared her experience with the Riptide’s Director of Stadium Operations and Marketing, David Lamm.

“‘This is the best-kept secret in Orange County. I cannot believe it’s free admission and free parking. My kid can run on the field, he feels like a major leaguer and the players are so gracious with their time. The beer prices are affordable. This is fantastic!’” Lamm recalled from the fan’s experience.

Lamm hopes the experience of a Riptide game spreads through Orange County, eventually shaking the moniker of the best-kept secret.

“We’re hoping to change it from the best-kept secret in Orange County to the worst-kept secret,” Lamm said. “We want everyone to come out and experience OC Riptide Baseball.”

Who Are the Riptide?

The Riptide is a summer baseball team competing in the California Collegiate League (CCL) and affiliated with the National Baseball Congress.
Entering their seventh year of existence, the Riptide offers collegiate baseball players from all levels an opportunity to play in a professional environment with wooden bats and professional balls, which differs from the metal bats used at the collegiate level.

The team is composed of players of all levels of collegiate baseball, including Division 1 to junior college. The Riptide’s roster is filled with local, Orange County talent as well as out-of-state-players, who live with host families during their Riptide tenure.

The Riptide play their home games at The OC Great Park, their third season of calling the OC Great Park, home. The stadium sits in the middle of Orange County with nearly a 1,500 seating capacity. Built in 2018, the complex is state-of-the-art with a video screen, indoor luxury boxes, press boxes and underground locker rooms.

“When you walk into the Great Park Stadium, you feel like you’re walking into a big-league park. It gives that feeling,” Lamm said. 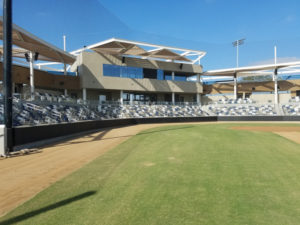 Alongside the modern amenities inside the stadium, the Riptide offers a variety of food and beverage options at a cheaper price than a Major League ballpark. Food trucks will be at every Riptide home game this season with options ranging from traditional American, barbeque and Mexican, among others.

“A dinner for four, and we’re not talking about something terribly extravagant, hot dogs, sodas, some popcorn, maybe an ice cream… that’s going to run you $60 – $70 at the major league level,” Lamm said, “Whereas at a Riptide game, you get food from the gourmet food trucks and it’s a full-blown meal for much less.”

For Riptide fans 21 and over, the newly dubbed Crush’s Cantina offers a variety of adult beverages, including beer, wine, and seltzers, at an affordable price.

“Our beer, wine and seltzer prices are extremely affordable… way more affordable than if you went to a professional baseball game,” Lamm said.

As word gets out about the Riptide experience, Lamm hopes baseball enthusiasts of all ages over Orange County can come out to the Great Park for a look at the future of the MLB. Notably, Caleb Kilian was recently called up to the Chicago Cubs and made his debut vs. the St. Louis Cardinals on June 4, 2022.

“It is a wonderful fan experience for kids, from infants all the way up to senior citizens. It’s a great way to see some high-level college baseball,” Lamm said.

The Riptide open their season at home on June 7 at 6:35 p.m. against the Ventura Pirates.