The 2021 Orange County Riptide ended the season 21-19, finishing .500 or with a winning record for the fifth season in the club’s six years of existence. Despite not qualifying for the California Collegiate League (CCL) State Playoff Tournament, in this 2021 OC Riptide Season Recap, the OC Riptide saw tremendous growth both on and off the field of play.

After COVID-19 caused the cancellation of the 2020 season, the OC Riptide returned to the Orange County Great Park on June 8 and turned in a 13-0 victory over the San Diego Waves. Since formation in 2015, 2021 marked the first season the Riptide returned to the same field as it did in the 2019 season. This consistency can only help build for the future. Baseball fans in Orange County will now understand that they will come to expect high level college baseball played at the Orange County Great Park in the summer months of June and July.

The opening night win put the OC Riptide in a good mood as they headed to Fairbanks, Alaska for a week long trip in the land where the sun never really sets in summer. There, the Riptide played the Alaska Goldpanners for three games and then stuck around to play in the Denali State Bank Tournament at Growden Memorial Park in Fairbanks. The tournament featured the previously mentioned Goldpanners and San Diego Waves along with Bercovich Collegiate for a four team round robin tournament. The OC Riptide came away with the tournament trophy going undefeated in the tournament.

Upon returning to Orange County, the Riptide played a handful of non-league games in order to prepare for the start of CCL play. The Riptide boasted a record of 6-2 when they opened the CCL season vs. the Arroyo Seco Saints on June 22. The 2021 Riptide squad strung together two different four-game winning streaks but by the end of the season, finished 21-19 overall and a 13-17 record in the CCL. Unfortunately a four-game losing streak to close the season sealed the fate of the 2021 Riptide to mark the second time the team has failed to make the CCL post-season.

During the season, the Riptide players and organization had plenty to be proud of including six players named to the CCL Showcase Game. The Orange County Riptide saw six players selected to play at the MLB Youth Academy in Compton, Calif to compete in the California Collegiate League (CCL) Showcase Game presented by ABDG. Players Dwight Allen (Georgia), Kyle Booker (Tennessee), Davis Diaz (Vanderbilt), Andrew Pogue (Illinois) and Tony Robie (Texas State) represented the CCL South Division in a game televised on Bally Sports TV. Eric Bigani (UNLV) was also named as a Showcase Game player but opted to not play in the game. The South All-Stars ended up winning the game 6-2 on July 14.

Days prior to the CCL Showcase Game, the OC Riptide saw three players selected in the 2021 Major League Baseball Amateur Draft. The New York Mets selected INF/OF Jack-Thomas Wold in the 12th round and a few picks later in the same round, the Arizona Diamondbacks selected infielder Davis Diaz. The Chicago White Sox selected right-handed pitcher Noah Owen in the 14th round.

Both Wold and Owen signed with their respective professional clubs and left the Riptide to start their professional baseball careers immediately. Diaz, a recent high school graduate from Acalanes High School, chose to honor his commitment to attend Vanderbilt University, did not sign with the Diamondbacks and played the remainder of the 2021 CCL season with the Riptide.

After the completion of the CCL regular season, the league announced four OC Riptide players were named to the 2021 CCL All-League Team. Pitchers Tony Robie and Spencer Edwards (Cornell) were joined by Outfielder TC Simmons (UConn) and Diaz to round out Orange County’s selections. Robie led the Riptide in strikeouts (52) while Edwards strikeout total of 34 was second best on the team. Simmons led all Riptide batters in home runs (4) and ranked second in RBI (25) and batting average (.310). Diaz finished the season with the third best batting average (.308)

Continuing the tradition of the Riptide players selecting the Team MVP, Pitcher of the Year and the Hustle & Spirit Award for that year’s team, the players took a poll to vote on those deserving of the awards. In a vote by their peers and teammates, the players honored:

In addition to the success as a team and individually the 2021 Riptide experienced on the field, the Riptide took its largest step forward off the field. The 2021 intern staff grew by nearly 500% in 2021 expanding from seven total staff members in 2019 to 34 in 2021.

This staff increase allowed the Riptide to better service baseball fans by offering expanded social media coverage, frequent game recaps and reports via the OCRiptide.com website, more between inning on-the-field activities, a two-person play-by-play and color analysis live-stream broadcast along with a live stadium organist. The increased staff allowed the Riptide to open up the “Party Deck” on the third base side, serving beer, wine and seltzers to fans age 21 and older. Each game featured a food truck offering made to order hot meals and the merchandise table offered pre-packaged snacks and bottled water in addition to OC Riptide branded merchandise.

2021 in-stadium promotions included gift card raffles, signed baseball bats along with partnering with a number of Orange County community groups. Little League All-Star groups came out in force with future baseball stars running onto the field with the Riptide players during pre-game introductions and many kids received autographed baseballs from the Riptide players. The Riptide also partnered with Stand-Up For Kids and the Great Park Neighborhoods Community Association during the 2021 season. Attendance estimates show that fan participation increased by and average of 300% from 2019 to 2021 totals. With more awareness and community engagements, the OC Riptide expects to increase attendance even more in 2022.

Engaging the Youth of Orange County

The community engagement did not stop with raffles and Little League nights. The Orange County Riptide also hosted a highly successful and well-attended Youth Baseball Skills Academy the week of June 21st-25th. Youth baseball players from ages 7-12 learned skills in all areas of the game of baseball including hitting, fielding, base running and team play all from top-notch college baseball players playing for the Riptide. In addition to receiving instruction from the players, OC Riptide Youth Baseball Academy participants ran out onto the field with the players during pre-game introductions prior to the June 25th contest vs. the Arroyo Seco Saints.

The 2021 season came to an end on August 1st but not before the Orange County Riptide honored and thanked the Host Families that opened their homes to numerous players who came from out of the area to play for the OC Riptide in 2021. Each family was recognized during a pre-game ceremony on the field where each family was introduced to the crowd and they were presented with a signed baseball bat autographed by members of the 2021 OC Riptide. 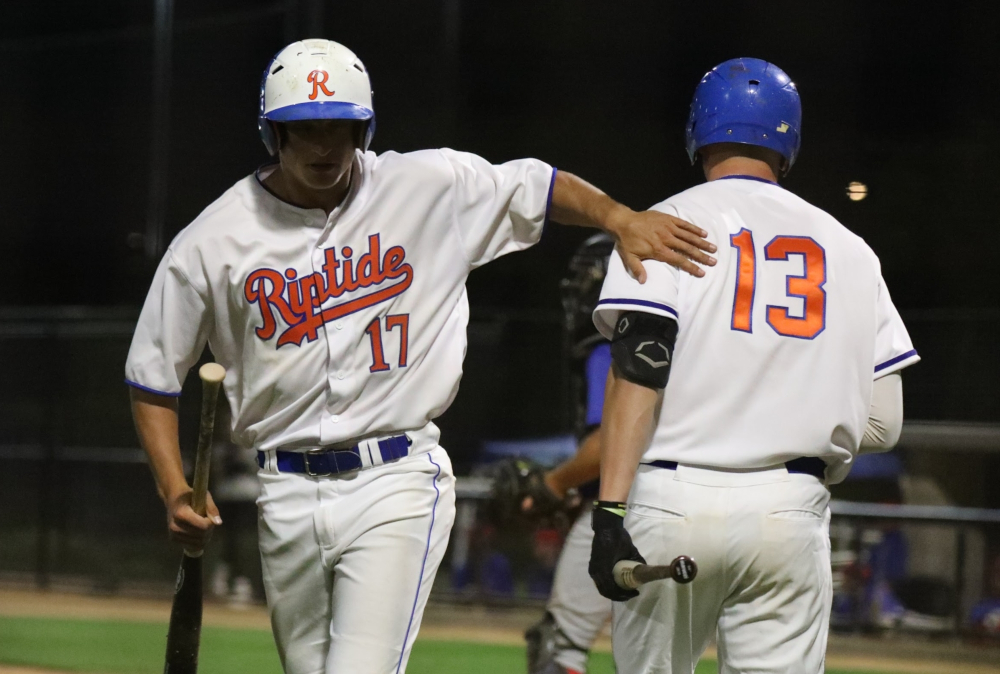 Although the 2021 OC Riptide did not qualify for the postseason, the Orange County Riptide Baseball Club can point to the 2021 season as a success both on and off the field. By securing another winning season and the many victories the organization achieved off the field and within the community, the future is bright for the OC Riptide. The Riptide Board of Directors and Front Office are already preparing for the 2022 summer baseball season and will look to build on the 2021 season in an effort to win a second CCL championship.